The relationship between plant diversity and ecosystem functioning has become one of the key topics in ecological studies. Niche partitioning, brought about by a complementary resource use of the coexisting plant species, has been suggested to be the prevailing mechanism to explain the positive relationship between biodiversity and ecosystem productivity.

Nitrogen (N) is one of the most important soil resources for plants. Coexisting plant species frequently compete for available N from the soil solution. Under N limited conditions, neighboring plant species can alleviate competition for N in the soil solution through niche partitioning, by either preferring different chemical forms or by varying the spatial and temporal pattern of N uptake. Till now, no study has explored yet to which degree the same plant species plastically adjust their N uptake patterns to increase niche partitioning in mixtures.

To addressed the question of whether plants are plastic in their N uptake preference when diversity increases in subtropical tree species. PhD student Min Liu in TreeDì from Institute of Geographic Sciences and Natural Resources Research, Chinese Academy of Sciences, her supervisor Prof. Xingliang Xu, together with some PIs in TreeDì project, Helge Bruelheide, Nicole M. van Dam, Bo Yang, Naili Zhang, and Zeqing Ma, conducted a microcosm experiment.

The microcosm experiment was conducted in Jiangxi Province, China, which is located nearby in Xingangshan. Four local tree species of Koelreuteria bipinnata, Lithocarpus glaber, Cyclobalanopsis myrsinaefolia and Castanopsis eyrei were selected, which represent one quarter of the broken stick design of the first random extinction sequence of site A of BEF-China.

The experiment was three-factorial designed, including tree species richness (1, 2 and 4), species identity, and three N forms (NH4+, NO3-, and glycine). In October 2019, four individual seedlings each were planted in pots at three richness levels. The four targeted tree species were planted in monocultures, in two different pairs that corresponded to the field design of BEF-China (pair 1: K. bipinnata and L. glaber; pair 2: Cy. myrsinaefolia and Ca. eyrei), and in a mixture of all four species. On September 10th, 2020, short-term in situ 15N labeling experiments were carried out. Plant and soil samples were harvested and measured. Plant N uptake preference for inorganic N form of NO3- to NH4+ and organic N form of glycine, as well as biomass and plant functional traits was evaluated under different tree species richness level.

Results showed that pot biomass productivity increased with tree species richness. Biomass of the most productive species, K. bipinnata increased, but not at the expense of a decreased growth of the other species. In mixtures, the species shifted their preference for the inorganic N form, from NO3- to NH4+ or vice versa. The uptake preference for glycine remained stable along the species richness gradient. Plant N uptake was well correlated with numerous functional traits, both aboveground, such as height and shoot diameter, and belowground, such as root diameter and root length.

This study concludes that increased ecosystem biomass production with tree species richness could be largely explained by niche partitioning in N uptake among tree species. These findings highlight that niche partitioning for N uptake should be a possible important mechanism maintaining species diversity and ecosystem production in subtropical forests. 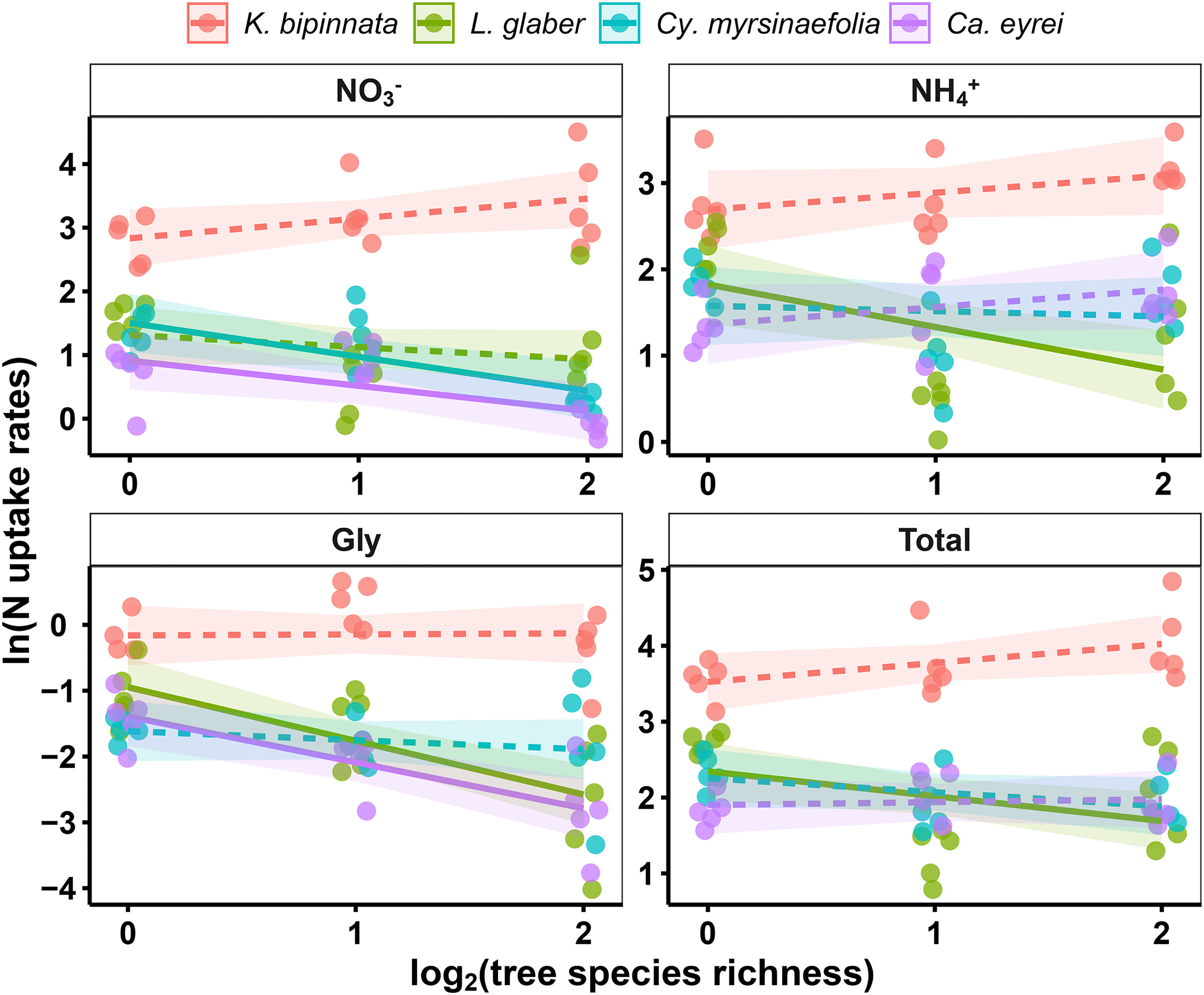 Fig. 3. Total biomass per species (a) and per pot (b) under different tree species richness levels (log2). 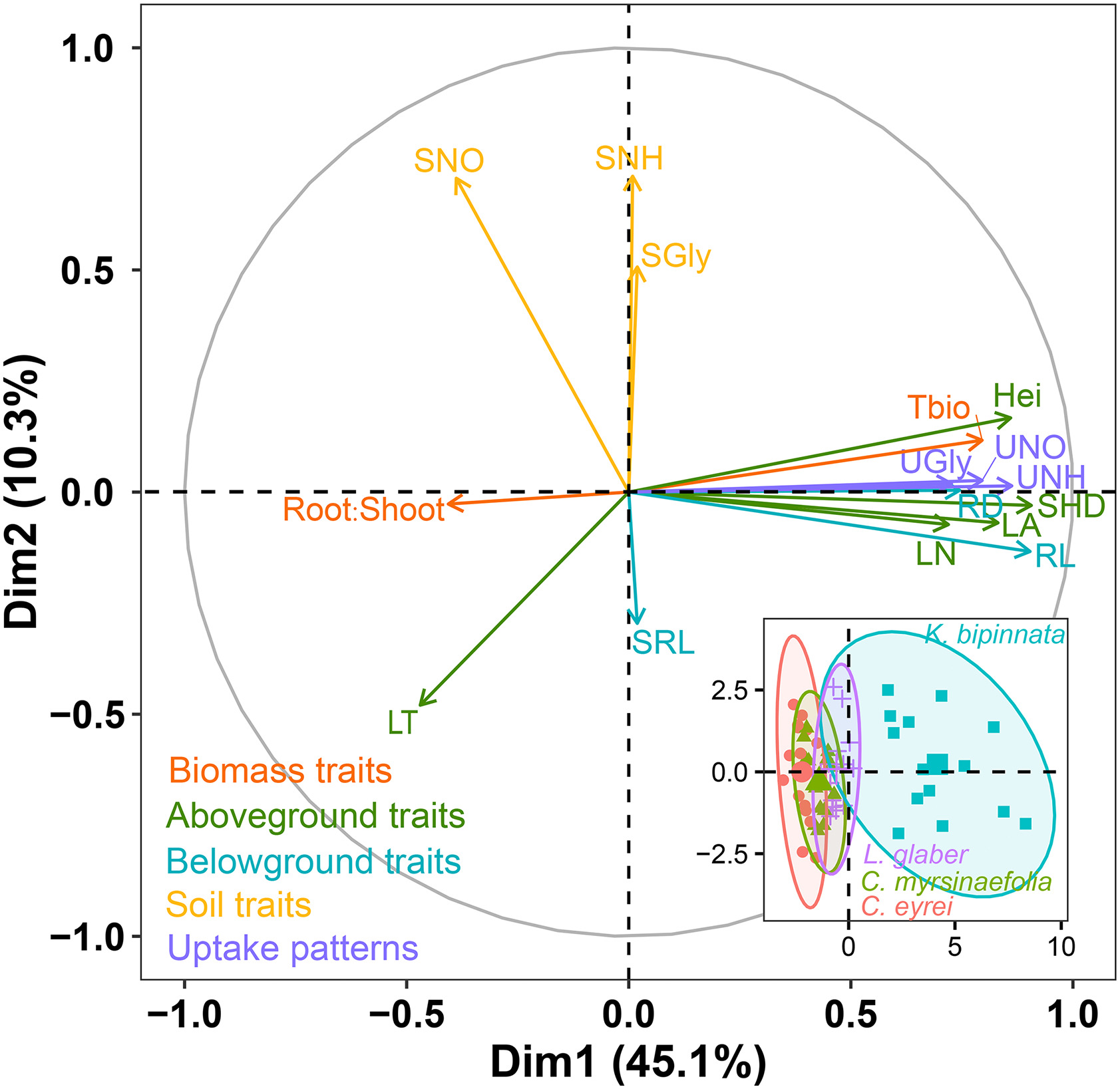