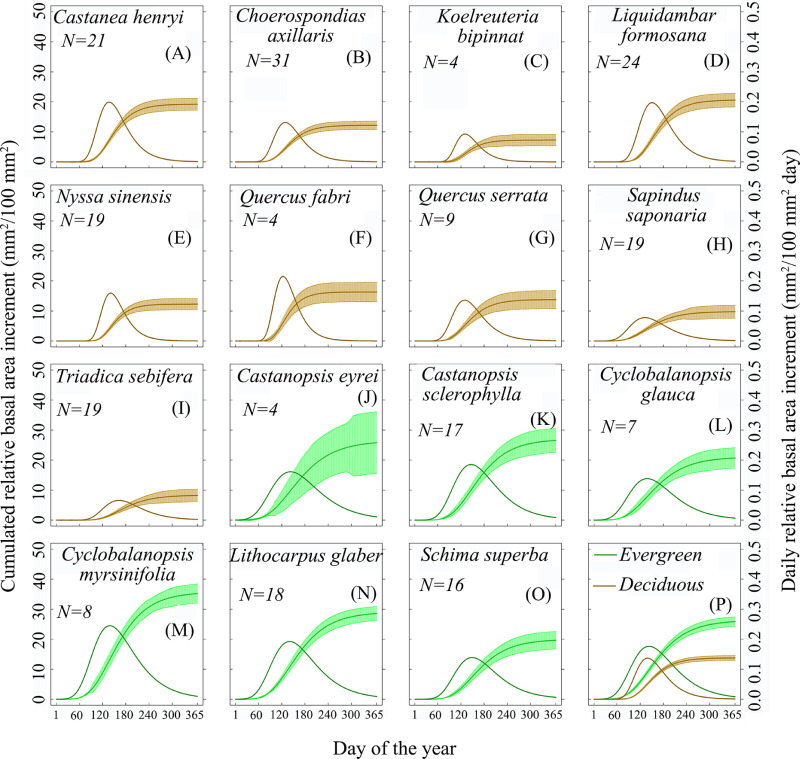 Tree growth is the most important factor in determining the carbon sequestration processes of forest ecosystems. However, the growth phenology (seasonal growth pattern) and responses of tree growth to climatic variables vary considerably among different species, especially between deciduous and evergreen species. Thus, it is crucial to explore the seasonal growth patterns of different tree species in relation to climate to better understand the responses of tree physiology to climate changes, especially in mixed-species forest stands. In this study, we monitored the daily basal area increments of 220 individuals belonging to 15 common broadleaved tree species, nine deciduous and six evergreen species, in mixed-species experimental stands in subtropical China and analysed the relationships between radial stem growth and seasonal climate at a high-temporal resolution. We fitted daily increments of stem diameters with four frequently used nonlinear models and chose the best model for each species. The results showed that the evergreen trees grew faster than the deciduous trees, both annually and within the growing season. The tested nonlinear models (Korf, Weibull, logistic and Gompertz) produced good fits for the growth patterns of all species. Overall, the evergreen species began stem growth earlier and finished later during the growing season than that of the deciduous species. Within the growing season, the radial growth of trees in mixed stands containing both types of species was strongly positively correlated with humidity. In spring, increases in both temperature and moisture increased the daily relative basal area increment of all species. Maximum growth rates occurred when the soil water content reached its highest level and gradually decreased when the soil water content decreased. In summer, high temperatures combined with low amounts of precipitation led to heat-induced summer drought, to which the evergreen trees appeared to be more tolerant than the deciduous trees, which was reflected in the reduced stem growth of the latter. These results indicate the different climate-dependent seasonal growth strategies of evergreen and deciduous trees related to the trade-off described by the leaf economics spectrum, i.e., short-lived leaves with higher assimilation rates in deciduous and longer-lived leaves with a greater drought tolerance in evergreen species